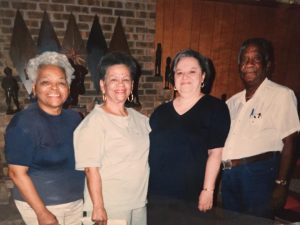 Freedom Day: The Commitment to the Next Generations

On the heels of Juneteenth is Independence Day, July 4th, the founding holiday celebrating the United States becoming an independent nation.  I was thinking about Juneteenth and my own ancestors.  They lived in Louisiana and Texas, so it is likely that they didn’t find out about the end of slavery for over a year after the declaration.  I tried to imagine their elation as they realized that they could no longer be bought and sold like cattle and tortured in such horrific ways ever again.  They could keep their children close and not be subject to the rape and abuse of their masters and their mistresses.  Those hopes were short lived as the white power structure quickly created new laws to “keep Black folk in their place”.  I thought about my great grandmother, whose name I do not know, my paternal fathers’ mother who birthed 12 biracial children by the slave master and the mixed feelings she must have experienced as the Black woman who lived in the little house behind the big house.  Where would she go?  What would she be allowed to do?  Most of her children had long run away to start a new life, passing as white.

My grandfather, Frank Moss, stayed in Louisiana, got a “good job” as a brakeman on the railroad, had nine children of his own and was a leader in the Black community in Winnfield LA.  He owned his own home.  He negotiated and mortgaged his home to build a school for Black children.  He gave a weekly food basket of eggs, vegetables, and a chicken to the teacher they hired to supplement their pay.  Others in the community did the same in honor of their hopes for the future of their children now allowed to be educated without fear.  He was an activist in his own right, advocating for voting rights and befriending politicians like Huey P. Long. He reminds me that I come from a history of activists and freedom fighters.

My dad followed suit as an activist leading protests and lunch counter sit-ins in Baton Rouge that ultimately got him expelled from Southern University’s Law School.  His siblings were all educators.  They all made a way for my generation to be college educated and to thrive in a hostile world.  And I am following in their footsteps, educating and exposing my own children and grandchildren and supporting their success, creating positive and powerful communities and making a way for the next seven generations.

It is my commitment, no matter what it takes, to create pathways of survival and success for my lineage and for my communities.  What is your commitment?  How are you moving your vision along each day? What keeps you focused and moving in action towards the prize?